Good Food is something which most of us enjoy, be it at our home or outside. Even if it requires any travelling, there are many people I know would love to just to enjoy a good meal. So when we heard about the food at The Westin Sohna Resort & Spa, we decided to take a day off from work and visit this place for experiencing the gourmet journey ourselves.

There are 3 restaurants at The Westin Sohna Resort & Spa at present – The Living Room, Xiaochi and the newly opened Choupal that caters to only Indian food. Since it is a new one, Choupal for the time being remains open only on Fridays, Saturdays and Sundays. Though Choupal still remains on our list which some day we probably will visit, we did get the opportunity to visit the other two and we came back with a wonderful experience.

Sumptuous lunch at The Living Room…

The Living Room is where we enjoyed our afternoon lunch. It is a multi-cuisine restaurant, open on all days of the week and serves breakfast, lunch, evening high tea and dinner.

We first started with Chaat, in which we were served bhel puri, papri chat, samosa chat and dahi vada. We just had a spoonful of each because we knew we have a long way to go before we feel ourselves to the brim. When asked what we would love to sip, we ordered for a glass of watermelon juice.

Soon followed the Salad in which we tasted the Mix leaf salad with orange dressing and mix green with mustard dressing. 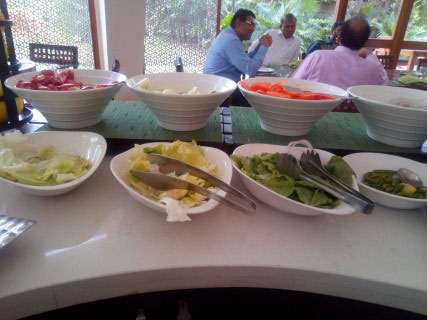 Then came the starters and a plateful of different tikki(s) were brought to us – mattar ki tikki, paneer tikki and tandoori broccoli. For non-veg, there was the option of mutton seekh kabab, chicken tikka and fish tikka. In soup we were recommended to try the pumpkin & basil soup with bread. 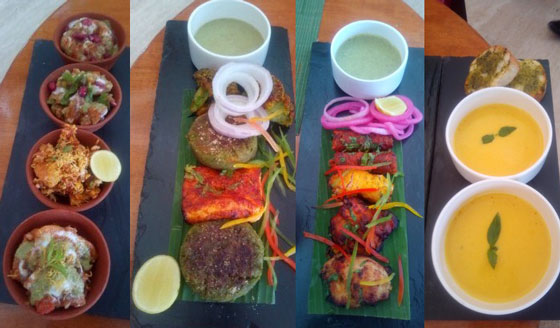 The Main course consisted of both Thai and Indian food. For Thai veg, there was the veg red Thai curry, while for non-veg there was stuffed chicken breast with jus. The Indian menu included Paneer dhania, dal makhani, rice, lachha paratha and papad. For non-veg there was butter chicken. Seeing such tempting food in front of me, I decided not to think about the extra kilos I might have gained that day and concentrated just on enjoying the food. The Indian menu is particularly very amazing and knowing the fact that Westin is popular for its Indian cuisine, we thought of giving it a try and the result was just outstanding! 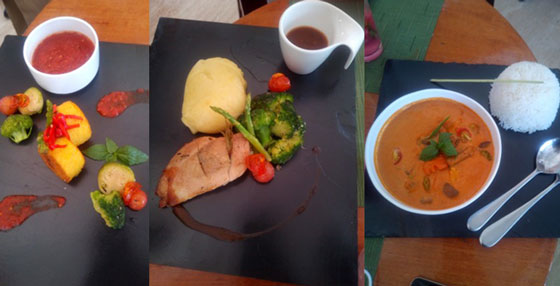 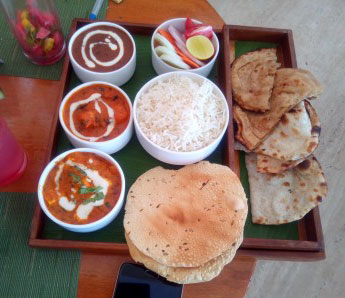 It was finally time for dessert and we had ras malai pista elaichi and chocolate bar, the latter happened to be one of the signature dishes of Chef Sandeep Saini. 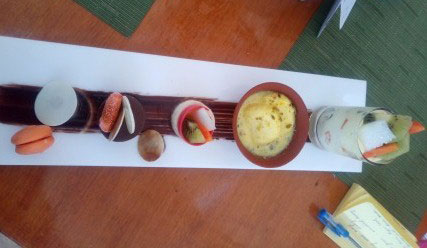 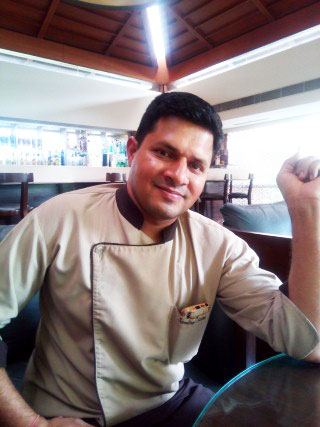 We also had our breakfast the next morning at The Living Room and the breakfast menu is as vast as you could think of – from different varieties of breads, cakes, fruits, juices, cereals, to Indian dishes like poha, puri – aloo sabji, idli and so on.

For dinner we visited Xiaochi – an A la carte Chinese restaurant, situated very close to The Living Room and Choupal. In Chinese, Xiaochi means ‘small bites’ and so we joked with the chef that we be given only small bites of everything to taste as we were so full, having eaten so much that day. The restaurant serves lunch and dinner on Sundays, while on all other week days it is open only for dinner.

We started our meal with Salads – cucumber and pineapple salad with sweet chilli sauce and the spicy peanuts mixed with red chilli powder, salt & sugar. They were so tasty that we never thought that we both will finish it in no time. 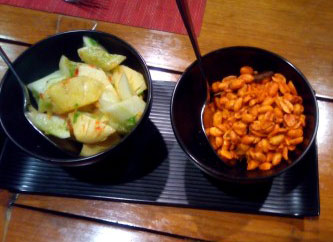 Next came the Soup, which was the straw mushroom & burnt garlic soup that had seasonal vegetables like broccoli, carrot in it. 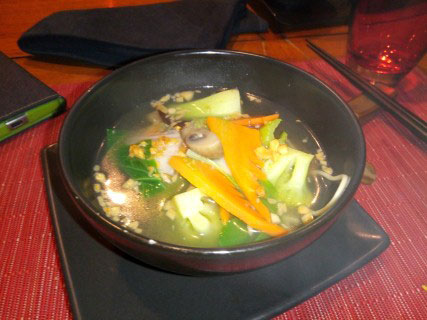 The starters which followed just after the soup was really interesting – we were served Schezuan crispy vegetables consisting of broccoli, carrot and baby corn and 4 different varieties of dim sums. The first was the mixed veg Jiaozi, which is a mixed veg marinated dim sum with red lotus leaf. Then there was the cabbage dumpling that had water cashew nuts and Chinese cabbage, followed by the Spinach Jiaozi and then finally the Chicken Shao Mai that consisted of ginger, spicy onion wrapped with wonton seeds. 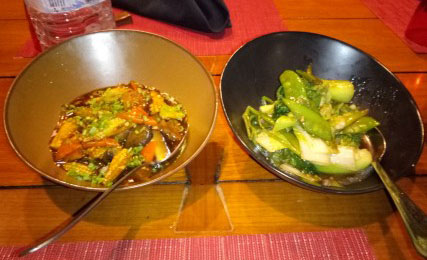 For the main course we had Lohan chi vegetables, which is assorted vegetables cooked in soya sauce and the Chinese leafy green (the vegetables used in it are mostly organic and are grown inside Westin). This we had with fried rice and noodles. 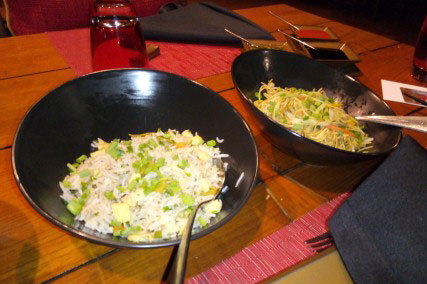 I always look forward to the Dessert part with unabated interests and when given an option between litchi and mango pudding, we thought of trying the former as it sounded very interesting. Sure enough we were brought the enticingly tasty litchi pudding with brown sugar syrup on top and rice flat noodles with honey & sesame seeds with vanilla ice cream on top. 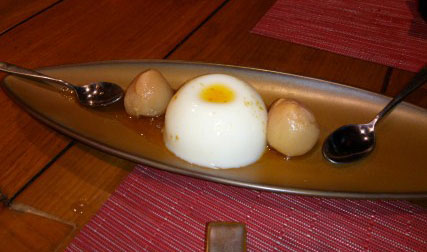 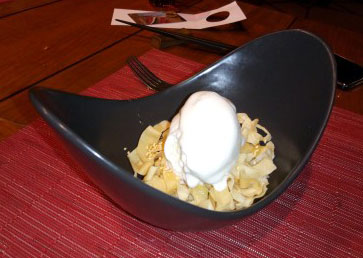 Since the variety was huge, we could enjoy everything in small amount. We were yet to enjoy the other services at the Resort, but after tasting the food at both the restaurants we became sure that The Westin Sohna Resort & Spa can surely be a food destination for people travelling from Delhi and nearby places and food lovers would not mind travelling so far to enjoy the food. It is a BIG YES from us!

The Westin Hotel Gurgaon, New Delhi Named Among The Top 10 Hotels In India 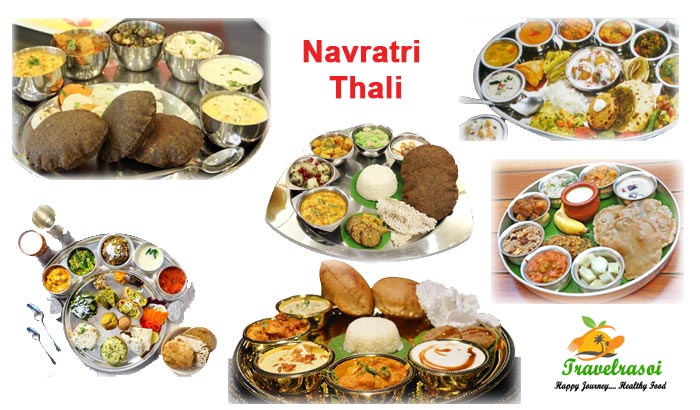 The Importance of ‘Navratri Thali’ for Devotees in India